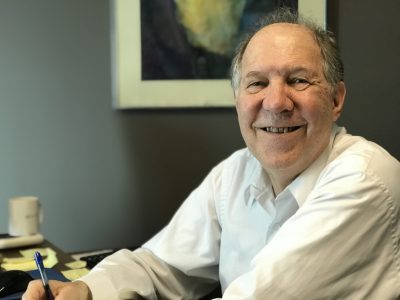 David was the lead attorney in Perez v. Vargas, a case in which the Fourth Circuit Court of Appeals interpreted a section of the Immigration & Nationality Act to successfully support certain applicants for immigration who must change employers during the process. He has gained relief for persons who have suffered political persecution due to their political or religious beliefs including persons who have suffered female genital mutilation before arriving in the United States and have the same fear for their daughters. Among the hundreds of cases he has handled over the years are many that include families that are facing separation of a family member from the family unit.

David has appeared on behalf of clients in Immigration Court and at agency hearings in over a dozen cities in the United States as well as consulates outside the U.S. He has been the invited speaker on the topic of immigration law at employment law and other legal seminars and classes. In addition to his practice David provides assistance to young non-citizens in need of legal advice through his position on the Board of Directors of The Dream Project.

Keivan Najafian Zahmatkeshan
They filed for my EB immigration case back in 2019. Although there were many inconsistencies in the process due to Trump administration and Covid19 lockdown, They well organized the process. At the time of filing my 485, I had just last week of 2019 to file otherwise the visa bulletin would no longer be current for my case and I remember they assigned two new attorneys to my case to file it in time and fortunately they did it with USCIS on 12/31! ( And obviously they charged my employer for that ) Totally, they are strongly professional and their commitment and responsibility to their clients is outstanding. Moreover, their update knowledge differentiates them from most of other attorneys who have an obsolete knowledge of the immigration law which puts their cases in jeopardy.

Kim Harris
The care and support we received from the team was excellent! After only 10 months I have my green card. Everything went smoothly and someone was always on hand to answer our questions promptly. Excellent and courteous service.

Uriel Vasquez
Will forever be grateful for their professional work. Haynes Novick Immigration team have given the opportunity for my family to open many doors for the future. I highly recommend!

Douglas Hinkle
The professionalism and dedication of Joy Haynes and her paralegals has been outstanding. From getting my wife her spousal visa to her US citizenship was a five year process and at no point were my wife and I uncertain about what would happen next, because we had Joy in our corner looking out for us.

Megan Gowers
On the recommendation from friends, we contacted Haynes Novick Immigration and are so incredibly grateful we did. We weren’t specifically looking anyone with experience in LGBTQ+ couples however we were happy to find Joy Haynes and her team (Amara and Anica) were extremely knowledgeable with cases like ours. As clients from early 2017 through mid-2021, the complex and complicated green card (with conditions then removal of conditions) and eventual naturalization process was explained thoroughly and managed timely from our initial phone call all the way through to receiving the naturalization certificate. Joy and her team were always one-step ahead, quick to answer questions and proactively managed our case so much that we never stressed or worried about it at all. We would highly recommend this firm to anyone needing immigration assistance.

Las Massaqoui
I am sincerely grateful to Mr. Jim Tom Haynes and his team(Lizeth) for helping me out with my case! I have always been able to have my questions answered, and it did not matter how many times I had to ask the same question. Lizeth always updates me on changes and how changes affected my case. Today I feel a lot better about my status and not worrying about loosing my family! The monetary value does not equivalent the peace they have help me attained. I remain grateful!!

Bianca Botas
I am beyond grateful and thankful that I had somebody to recommend me Ana Sami for my immigration issue. The day I called and spoke with her was the day I was sure that she will really be implicated and help me with my matter. I was at a point where I have lost all my hope and the day of my interview was coming very soon and I had no idea how I should deal with this whole situation. Ana encouraged me and told me all the possibilities as far as how my case can be resolved and she was there for me every step of the way. She told me from beginning what the price would look like and I was ready to go ahead and start the process to find out by the time I had to pay it was even cheaper and that was a big plus considering what is going on in the world and how a lot of people lost their jobs or lost their businesses among other problems we might not be aware of. The professionalism and the implication she has is beyond words!! I don’t think google is going to let me write such a big review to say all the nice and kind words I have to for such a great person she is. Thank you again to you Ana and thanks to Haynes Novick Immigration for solving my problem and I’ll make sure to recommend you to everybody who is looking for an immigration attorney!!!

Rachel Tang
Ana Sami was great in helping me with my green card and made the process smooth. She was very professional, helpful, and always willing to answer any questions I had.

Rohan Mazumdar
Ana Sami and the team at Haynes Novick were excellent at guiding my spouse and I through our immigration process. From clear upfront guidelines, to navigating a very turbulent period at USCIS, to being our counsel during our interview, we felt very well taken care of. Highly recommend them, based on our great experience!

Jason Rada
We highly recommend Haynes & Novick Immigration. Thank you very much Atty. Zachary Kohn and Atty. David Rothwell. We (me and my wife) are very grateful to have you as our lawyers. Our case has been the most difficult, but you stayed with us and guided us on our immigration journey. Thank you for helping us to finally get our greencards. God Bless.
Google rating score: 5 of 5, based on 110 reviews