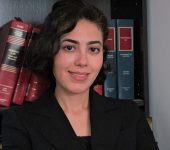 Attorney Ana Sami has been practicing immigration law since 2016. She was previously an associate attorney at the Law Office of James A. Roberts, PLLC where she handled asylum, adjustment of status, naturalization, consular processing, and many other immigration processes. She has represented clients before the Arlington Immigration court as well as the Baltimore Immigration Court.

Ana is a graduate from Catholic University of America Columbus School of Law and has received a certificate in Comparative and International Law. Ana’s undergraduate degree is from the George Washington University Elliott School of International Affairs, and her Graduate Degree is from the Colorado School of Mines. Her experience in immigration includes working as a law clerk for the Department of Justice Office of Immigration Litigation, serving as an interpreter for immigration and asylum interviews, and she was enrolled in her law school’s immigration clinic where she worked on an LPR cancellation case for a refugee from Sierra Leone. She is fluent in Farsi, proficient in French and has basic proficiency in Arabic.

Check out my reviews and connect with me around the web!

It was a long journey! It started with my own work visa, getting married and filing for myself and my wife's green card. Joy Haynes and her paralegal Leo helping our whole family of 3 getting our green cards and eventually citizenship. Thank you for all the insights, guidance, and patience! We wouldn't have been able to do that without you guys! Thank you especially for always being very responsive as well!

Terence Sham
20:41 31 Oct 17
We worked with Joy through the lengthy green card application process and removal of conditions. While the journey is undeniably stressful, working with Joy made it as smooth as this process could be. Joy and her team are extremely professional, efficient and responsive. They kept us organized, confident and answered our many questions promptly and reassuringly. We would and wil recommend Joy to anyone who needs a great immigration lawyer. Thanks a lot Joy.

Estelle Raimondo
18:24 04 Nov 17
Amy Novick was our lawyer and she did excellent job that we received our green card in a very short time. She was very prompt, professional and knowledgeable about permament residence card and its processes. Highly recommend their service.

Pad Batkhuu
14:45 28 Sep 17
Joy has helped me since day one, from my first VISA until I finally became American citizen this past July! She's always been very thorough, prompt and transparent. I highly recommend her and her firm!

Alessandro Bolis
21:55 13 Sep 17
My husband and I worked with Joy for my green card application, removal of conditions, and naturalization, and we couldn't have been happier. Joy was a pleasure to work with, and was always extremely accommodating and responsive to our (many!) questions. We would absolutely recommend her to anyone looking for an immigration attorney.